Could you please give me some advice on what I’m doing here?

To determine the central city residency, I use “METRO” variable. I know that “METRO” is based on METAREA and PUMA variables that may vary over years (also am aware that there is a change starting from 2012 for ACS).

So I think there is no problem for the later 5-year file because METRO variable is based on 2013 MSA definition. But for the earlier 5-year file, what I’m doing is determining whether a person living in a 2013-definition metro area lived in a central city or not according to 2000 definitions of central city and PUMA. And I’m going to compare the numbers (percentages) of people living in central cities in 2010 and 2017 using MET2013.

I’m using central cities as a proxy for downtown areas. I see some problems here, but I’m not sure how big the problem is. Could you give me some thoughts on this and maybe suggestions?

If your main interest is “how many people” live in a particular area, summary data are a more reliable, simpler, and more robust option than microdata. (IPUMS USA provides microdata. You can get summary data from IPUMS NHGIS.)

Through NHGIS you could find and download summary tables with population totals for all principal cities (the current term for central cities in metro areas) by finding the corresponding geographic level: 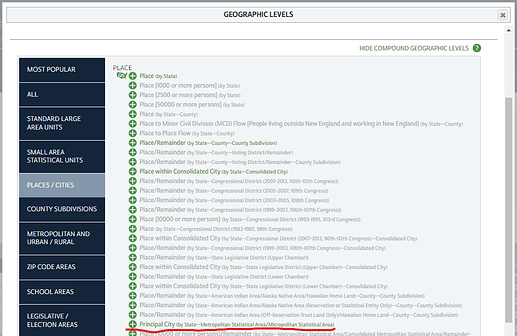 Or you could get nation-level summary tables and add a “breakdown” for population in principal cities of metropolitan areas: 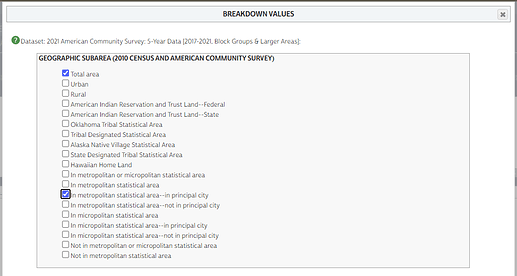 In comparison, the METRO variable does a relatively poor job of distinguishing population in principal/central cities because many principal cities don’t align with PUMA boundaries.

That said, principal cities are also a problematic proxy for “downtown areas.” They are often very expansive, and the share of population in principal cities that also lives in “downtown” (as typically construed) is quite small. There’s no official delineation of downtowns, but there are some other ways to approximate them. E.g., this Census Bureau report distinguished census tracts by distance to the city hall in major cities. Another option would be to distinguish tracts with higher densities, or, if you’d prefer to use microdata, you could use the DENSITY variable to distinguish populations in the highest-density PUMAs.

Thank you so much for the answer!

The reason why I’m using the individual-level data is that I want to get center city shares of specific subgroups of the population that are not in the summary files to my knowledge. Also, I used the word “downtown”, but the question is more of who lives closer to the city center (central business district).

About the DENSITY variable, I think that is a great suggestion. I think I might be able to use METRO and DENSITY variable together and classify PUMAs that partly lie in the central/principal cities and have high densities as PUMAs that are closer to the city center. There are some researchers who define “downtown” using the number of population from the city center (which I will try to do sometime), and I think it gives a similar vibe if I use those two variables together.